Europe is baking - Fridge in Action

An amazing spectacle, slightly creepy even. And the best thing is the cooling effect.
Temperatures drop from around 34 Celsius in the afternoon to a refreshing 22 in early morning, while those living just a little away from the coast are finding it hard to sleep without aircon and night temperatures around the 28 to 30 mark.
Should you want to sleep close to or on the beach, bring a jumper and a good sleeping bag. 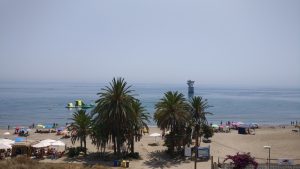